ATLANTA, May 31, 2018 /PRNewswire/ — Chick-fil-A® is sweetening the menu during the «The Summer of Peach» with two seasonal menu items rolling out nationwide today. White Peach Tea Lemonade is a new, refreshing beverage that combines Chick-fil-A’s classic Iced Tea and Lemonade (or Diet Lemonade) with the flavor of fresh white peaches. The beverage launches in all restaurants following a successful test in South Carolina last spring. The Peach Milkshake, a summertime customer favorite, also returns to menus nationwide to help guests beat the summer heat. 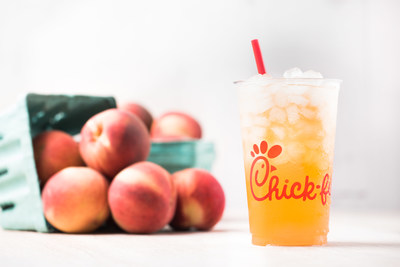 «Customers often order a tea/lemonade combination at our restaurants,» said Amanda Norris, senior director of menu development for Chick-fil-A. «This is the first time we’re officially adding the popular flavor combo to the menu, with the extra twist of an essential summer taste. The White Tea Peach Lemonade combines all the flavors of summer for a refreshing beverage we think our customers will love.»

Customers at participating restaurants in Charlotte, N.C. and Albuquerque, N.M. can order a new snack from the Chick-fil-A menu: Chick-n-Sliders. Available for a limited time through the summer, Chick-n-Sliders are made with Chick-fil-A’s signature chicken filet served on a warm roll and topped with honey butter spread. Chick-n-Sliders are available in the test markets during the lunch, snack and dinner hours.

Starting June 4, customers at participating restaurants in Tampa, Fla., Little Rock, Ark. and Indianapolis will be able to order breakfast favorite Chick-n-Minis throughout the day for a limited time this summer. Chick-n-Minis will be available in 4-count, 10-count and catering tray options.

«Both Chick-n-Sliders and Chick-n-Minis are delicious snack options for guests to enjoy throughout the day, and feedback from customers in these test markets will help determine if they are added to the menu nationwide,» Norris said.

For more information about Chick-fil-A and stories about the company’s food, people and customers across the country, visit thechickenwire.chick-fil-a.com.

Atlanta-based Chick-fil-A, Inc. is a family owned and privately held restaurant company founded in 1967 by S. Truett Cathy. Devoted to serving the local communities in which its franchised restaurants operate, and known for its original chicken sandwich, Chick-fil-A serves freshly prepared food in more than 2,300 restaurants in 47 states and Washington, D.C.

Chick-fil-A reported more than $9 billion in revenue in 2017, which marks 50 consecutive years of sales growth. A leader in customer service satisfaction, consumers voted Chick-fil-A, Inc. #4 in Harris Poll’s annual corporate reputation survey, ranking the company 4th out of 100 in 2018. Chick-fil-A was also recognized for customer experience again in the 2018 Temkin Experience Ratings survey, was named «Best Franchise Brand» in 2018 by Airport Revenue News and was named one of the top 100 best places to work by Glassdoor in 2017. Continuing its founder’s legacy of generosity and service, in 2018 Chick-fil-A’s Remarkable Futures initiative awarded $14.65 in scholarships to restaurant Team Members nationwide. In 2017 the company’s philanthropic Chick-fil-A Foundation awarded $1.23 million to 23 not-for-profit organizations across 13 states through the True Inspiration Awards. More information on Chick-fil-A is available at www.chick-fil-a.com.