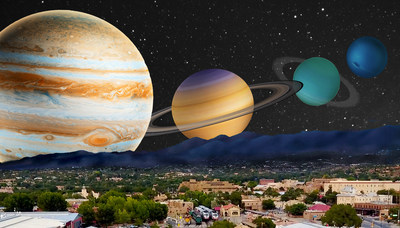 Theaters and arts businesses in the Railyard district will host space-themed events during the festival.  The Jean Cocteau Cinema will screen movies like «Forbidden Planet» and «Terminator 2: Judgment Day;» SITE Santa Fe will be showing select episodes from Carl Sagan’s original «Cosmos» series; and the Violet Crown, will offer space-themed beers to accompany a screening of «The Fifth Element,» to be introduced by Scott Ross, who created the film’s visual effects.

Updates and further information on the InterPlanetary Festival are available at interplanetaryfest.org

About the Santa Fe Institute
The Santa Fe Institute is an independent research center exploring the frontiers of complex systems science. Operated as a nonprofit in Santa Fe, New Mexico, we work with a global network of scholars to study and understand shared patterns across complex physical, biological, social, and cultural systems.