SANTA FE, N.M., Aug. 17, 2018 /PRNewswire/ — Santa Fe Indian Market is pleased to announce this year’s Best of Show, Best of Class, and special award winners in a variety of classifications. For 97 years, Santa Fe Indian Market, the world’s largest and most prestigious Indian art market, has awarded Best of Show winners to the nation’s most exceptional artists in a variety of juried categories. 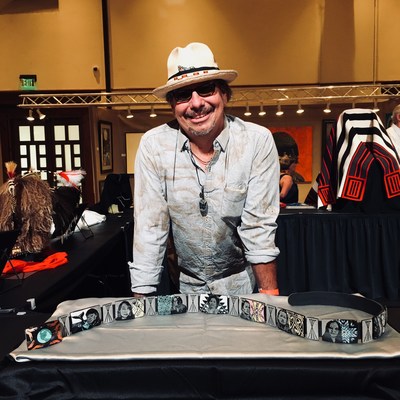 Over 40 judges, experts in various mediums spent all day Thursday, August 16, reviewing and critiquing this year’s entries and determining the winners. The announcement of the Best of Show, Best of Class, and Special Award winners was made publicly at the Best of Show Luncheon on Friday afternoon.

«My work is a belt with portraits of Native women from around the country. During the Standing Rock protests, there was a lot of coverage about men. But the women were there. They were cooking and taking care of the families and then out on the front lines. My wife said, ‘you need to create something for the women warriors.’ The portraits are carved buffalo horns, used by my Lakota ancestors since the beginning of time,» said Mr. Pourier as he accepted the award.

All of the Best of Show winners’ phenomenal artwork will be available this weekend during Santa Fe Indian Market on the Plaza in downtown Santa Fe.

This year’s Best of Class winners by classification are:

«Art is a way for countless Native people to support themselves while sharing and celebrating history, tradition and culture. There is no better way to experience this magic than by being at Santa Fe Indian Market,» said Ira Wilson, Executive Director of the Southwestern Association for Indian Arts (SWAIA), which produces the Santa Fe Indian Market.

A full schedule of events can be found at www.swaia.org.